The Origin Of Gilles Gratton's Mask - Lion or Tiger?

If you are aware of Gilles Gratton's great mask, you might be interested to know where it came from and whether it's a Lion or a Tiger. 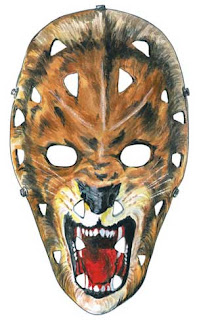 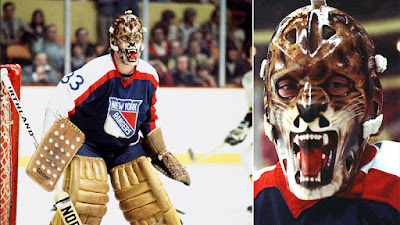 This is a 5 minute interview recorded in 2012 with Gilles at his work, discussing the origin of his mask. It tells the wholes story, so if you have a chance, take 5 minutes and hear Gilles tell the story live and in person.
Part 1:
Part 2:
Part 3:

Gilles explains that when he was with the Rangers in 1976-77, he was on a plane playing backgammon with teammate Ron Greshner. Between games, Gilles was flipping through the pages of a National Geographic magazine and came across a great photo of a tiger - see the actual photo below.

Gilles thought the image would be great on a mask, and asked his pal Greshner what he thought. Gresh was less than enthusiastic, but Gilles kept the magazine and over the next little while kept thinking how great the tiger image would look on a mask. Some time later, Gilles contacted custom mask maker Greg Harrison and told him about the tiger image. Greg asked Gilles to show him the image next time he was in Toronto, which Gilles did.

A short while later, Harrison had made the mask - in the video Gilles describes the mask's debut and how none of his teammates had seen the mask until he wore it onto the ice for the start of a home game against the Blues. The date was January 30, 1977 - a 5-2 win for Gilles and the Rangers. The game stats can be found here:

Even though the mask is clearly that of a Tiger, people speak of the mask as being a Lion, and even now Gilles sometimes finds himself referring to it as a Lion (see the end of the 3rd video) even though he knows better than anyone that it's a Tiger.

So Lion or Tiger? Tiger it is.

Lions and tigers and bears. Oh my.

The only other part of the story that should be told is that I previously believed the urban myth that the mask idea came from a combination of astrology and past lives... The astrology part is that Gilles Gratton was born July 28, and thus is a Leo - Leo the Lion. That makes some sense. The past lives part stems from the stories that Gratton had a reputation for being a bit flaky (he did after all quit hockey to spend several years pursuing Transcendental Meditation), and he apparently talked about past lives he had lived - and I thought I had heard that he felt in one past life he had been a lion, or perhaps killed by a lion. So merge those thoughts together and that's where I thought the Lion motif had come from.

But now we know the true story - it's not really a Lion, it's a Tiger. And it came from the pages of National Geographic.


Thanks for reading -
Scott 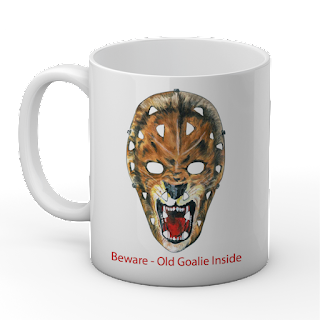 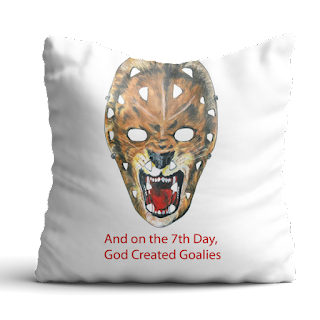 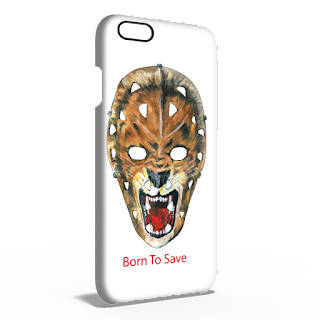 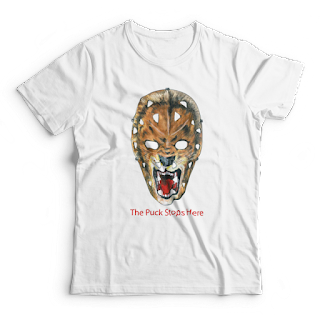 To see more Gilles Gratton products or to purchase, just choose which phrase you like and click on it.

And On The 7th Day, God Created Goalies

My Crease Is My Castle

Scott Sillcox
My name is Scott Sillcox. I am perhaps best known for my company Maple Leaf Productions. For 15+ years I was a licensee of the NFL, MLB, NHL, CFL and through a related company, NCAA/US colleges.

I have three blogs:

Licensed Sports Products: This blog is designed to share information not available on the internet - my way of helping people interested in the world of licensed sports products. I am available for consulting to potential licensees and my goal is simple, to help you decide to try for your own licenses or to work with an existing licensee.

Heritage Uniforms and Jerseys: This blog shows virtually all of the uniform and stadium artwork that we created, and tells the stories behind the uniforms. If you love the history of uniforms and stadiums, this site is for you.

Goalies Rule: A celebration of vintage goalie masks and a family of products featuring those masks.

I also have several websites:

The Origin Of Gilles Gratton's Mask - Lion or Tiger?